Can Mission R actually be an EV718 Cayman?

The other day, when Porsche was told that it would announce a new concept car, thatPrediction of what the concept car will be announcedI think that "718 Cayman / Boxster of full electric car" was the most influential in the overseas media.

However, what was announced this time is "A fully electric vehicle for Porsche one-make races that Porsche customers can participate inIt was a concept car positioned as ".

What is being said here again is, "Well, but this Mission R is, isn't it the concept of the EV718 in the future?"

Ah, it's become a dubious blog again (laughs). I hope you can read it in less than half the story (just like this recently ^^).

Now, returning to the story, when the Taycan was announced, Porsche was positioned to announce a completely new model of a full electric car, but Porsche is currently focusing on "changing the existing model to EV. To go. "

alreadyAnnounced that Macan will also be fully EVIt has been.

And it is said that 718 Cayman and 718 Boxster will also be fully EV following that (Porsche CEO Oliver Blume said in 2019).

This time it came out thereMission R announced at IAA Mobility 2021..

When announced, it will be the GT racing car of the future full electric car, so to speak, it was announced as a model that will be the successor to the current Porsche 911 GT3 cup car ... ..

Looking back on the past, Porsche first announced a concept car called "Mission E" in 2015.

The Mission E later debuted as a so-called generally sold production car that was not a race car called Porsche Taycan.

After that, a concept car called "Mission E Cross Turismo" was announced in 2018, and it was later produced as Taycan Cross Turismo.

In other words, for Porsche, the concept car "Mission xx" can be thought of as meaning a model that will become a production car that will be sold to the general public in the future.

Looking closely, it was also the comparison with the 718 model that the size feeling of the car was compared at the time of the announcement of this Mission R.

Actually comparing the current 718 Cayman and the mission R announced this time, it seems that there are quite similarities.

Isn't the rear quarter window quite similar? It is said that ...

In Germany and the United States, "Fried eggIt may indicate that Boxster can be a Boxster from the viewpoint that the boxster whose center is yellow and the headlight of 996 (911) is said to be a homage ...? What?

And at the time of the announcement of Mission R this time, Porsche CEO Oliver Blume was said that "Mission R aims for production in 2024".

Is this a coincidence?

No, maybe in 2024, EV718 Cayman / Boxster based on this Mission R concept will be announced and production will start, and after that, a model for one-make race based on Mission R will be released. ….

Everything I write may be a lie (laughs).

Source:Porsche Mission R Concept Could Be a Future All-Electric 718 Road Car in Disguise 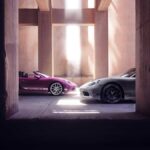 Style-oriented 718: featuring novel colors and harmonious contrast packaging The "Porsche 718 Style Edition" announced on November 2, 2022. Since it is a 718 model, Cayman and Boxster ... 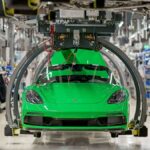 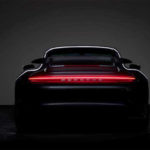 The decision to hold it has changed, and it has been considered for some time whether the Geneva Motor Show in 2020 should be held to cancel it suddenly, but the other day it was just announced that "I will do it as usual". That departure ... 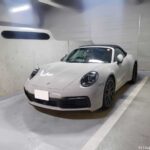 If you are warned after switching to WET mode, it's rainy season right now! It is in Tokyo where the weather is like that. I run in a 992 cabriolet even in such heavy rain. The other day I ran behind my husband M3 ... 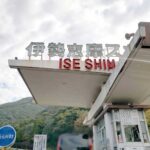 Morning Caroline and near miss? Sorry ~

The ship that carried the Porsche The other day, I went for a drive with my husband on the BMW M3. The purpose was not to run the Ise-Shima Skyline, but is this the second time since the beginning of this year? Third time? Ise-Shima Skyra ...