Last month (July 2022), I participated in a participatory talk event held at Porsche Studio Nihonbashi, so I would like to talk about that time.

This time, for me, it was just opened in April 2022.Porsche Studio NihonbashiIt was my first experience to go to.

When the store was still under construction before it opened, I had seen it from the outside thinking, "Oh, I can do it here," but I hadn't visited it since it was completed.

What is Porsche Studio?

First of all, I think "What is Porsche Studio?" What is the difference between Porsche Studio and Porsche Center at first? I thought.

In a nutshell, the Porsche Studio is:

So, of course, it is also possible to order Porsche.

By the way, Porsche Studio Nihonbashi will also launch "Porsche Center Adachi" in Adachi Ward in the future, so it seems that Porsche maintenance etc. will be done there.

Porsche Center Adachi will be equipped with all the functions of a Porsche dealer, such as selling and servicing new Porsche cars and certified used cars.

By the way, Porsche Studio Nihonbashi, which I visited for the first time, had an atmosphere that matched the traditional locality of "Nihonbashi".

Noren is one of them.

The store is certainly a barn and a wide Porsche Center! Rather than feeling like that, it feels like "Oh, urban type" that seems to be attached to a stylish cafe. No, how does that feel? (laughs)

A talk event was scheduled to be held on this day, so the car disappeared from the space at the back of the store, and it was arranged so that some participants could sit down.

In front of the chairs where the participants sit, there is a large wall screen.

At the event, I explained while projecting presentation materials here, but other than that time, various images of Porsche were played, and that alone was impressive and wonderful ^ ^

A guide was distributed to event participants with a brief explanation of Porsche Studio Nihonbashi and other information, as well as an explanation of the company called Porsche Holding, which is the parent company of the event.

Porsche Holding is a so-called car sales company headquartered in Germany, and although the company name is a little confusing, it is not Porsche AG.

It is said that Porsche's name is attached because it is a company established by the children of Mr. Ferdinand Porsche, the founder of Porsche. I see.

I'm really happy because I don't usually have the opportunity to talk about this kind of thing properly in a seminar format.

Even if I don't understand the content, it's fun to listen to.

The name of the mechanic from Germany is Marcus.

Mr. Marcus spoke in English, not German, but I was wondering if a simultaneous interpreter would be available at the event.

However, there was no one specializing in interpreting, and the person who interpreted Mr. Marcus's presentation on this day was a Japanese mechanic from Porsche Studio Nihonbashi (eventually PC Adachi?).

He used to work as a mechanic in America, so he is fluent in English. !

In the presentation, from the design connection of Porsche models, he explained the technical contents mainly of Porsche 911.

Looking at the diagram of the cables running around the 911, I thought it looked like a human blood vessel.

Unfortunately, I can't introduce the details of the presentation here, but I learned a lot and was able to spend a very meaningful time.

Thank you to Marcus and the mechanic for translating.

The Porsche 911 GTS (type 992) that was on display at the Porsche Studio Nihonbashi also opened the rear hood and removed the cover under it, so I was able to see the inside.

It's something you don't usually get to see, so I was kind of moved to see it.

In addition, the front part was also visible with the upper cover of the trunk removed.

Oh, it would be great if you could show me where and how the sealant is in there.

Because my 992 doesn't seem to have sealant where it's supposed to be in the first place? ? Check it out next time.

Since this 992 type Porsche 911 is a GTS model, its tires are center lock.

Let's remove this center lock tire! Because I let the participants try it in practice.

A long torque wrench was set, and participants were allowed to try "loosening" and "tightening" the center lock with this torque wrench.

This is also not an experience that you can usually do, so the people who actually tried it enjoyed it and said, "Oh, it's heavy!"

After removing it, he explained various things, and after this, he accepted questions if there was anything I wanted to ask individually, so I asked him a few questions. I was.

I would like to write about what I asked Mr. Marcus and what he taught me.

After the first presentation, there was also a quiz competition related to Porsche as another main event (?).

I was told that there would be a prize for the person with the most correct answers, so I'm a little more motivated to do my best.

Rather, as a real intention, I wrote a blog saying "I love Porsche" so much, but I thought it would be embarrassing if it was almost incorrect (laughs).

Many of the first problems are fairly simple, such as what is the origin of the name "Macan" in Porsche "Macan".

And in the quiz of the day, there were two problems that Porsche Studio Nihonbashi set as the most difficult.

The two are problems related to the tightening torque of Porsche 911 tires (wheels).

The first of the difficult problems is "What is the current Porsche 911 wheel bolt tightening torque in Nm?"

What is this! ! Yes, this is a very lucky problem for me. Easy win.

'Cause I, a few days before this eventI changed the tires on my Porsche 911At that time, I had just reviewed myself and reconfirmed that the tightening torque of 911 is 160Nm.

Furthermore, the second difficult question is "How much should the center lock nut be tightened?"

The answer choice at this time is

In my mind, I was absolutely confident that the tightening torque of the 911 Carrera was 160Nm, so 160Nmx5 = 800Nm ... In other words, it must be the closest number to this. From the calculation, I chose 600Nm, which is the largest value among the answer options, and it was safely the correct answer.

I was really lucky with everything (laughs).

I changed the tires a few days ago, and it was good to review the tightening torque ^ ^

Thankfully, I got all the questions correct, so I received a booklet about Classic Porsche as a prize. Thank you

By receiving this, my husband said, "Maybe God is telling me to learn more about air-cooled Porsche soon."

Oh yeah, by the way, here's a story (?), Actually, at the time of Mr. Marcus' first technical Porsche presentation, there was a document written that the tightening torque of the center lock was "443 ft-lb". n/a.

443 ft-lb translates into 600Nm. In fact, the answer was already displayed.

Also, I would like to visit the Porsche Center Adachi when it opens. Thank you for teaching me various things ^^

Moreover,SNS of Porsche Studio NihonbashiI was happy to be able to meet the so-called "people in the middle" who are in charge of (laughs).

Furthermore, through that person, I was able to meet Porsche owners who are following me on Twitter by chance here.

I was really entertained until the very end, and just before I decided to go home, I was worried about the center lock placed in front of the 992 tires and picked it up...

"Be careful not to get greaseMy husband said to me, "It's okay, it's okay. You said you're careful!"

In this way, I would like to learn various things about Porsche while experiencing and experiencing it one by one ^ ^

Everyone at Porsche Studio Nihonbashi taught me various things, guided me, and I was able to have a very meaningful and enjoyable conversation with Mr. Marcus, who came from Germany, and the mechanic who will go to PC Adachi in the future.

I hope that I will be able to visit you again in the future. I will write about the conversation with Marcus separately.

Thank you for the great time! 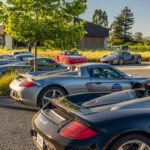 Speaking of Porsche's Carrera GT where nine Carrera GTs meet and run together, it is a model that seems to be amazing just to meet one because of its rarity, but this time the Carrera GT rally where nine cars gather It was held. ah ... 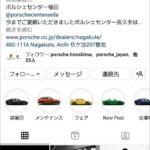 [Addition] Now, Aichi prefecture is hot in Porsche Instagram in me

Porsche Center Nagakute Ueda Certified Used Car Center Suddenly, recently I have a daily routine to visit a certain Porsche related site in Aichi prefecture, which is one of my daily pleasures. Is it about the last two months? ... 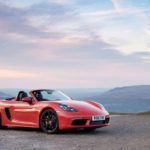 Porsche 718 Boxster and 718 Cayman to hybridize 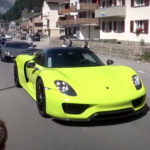 Porsche 918 Spyder vs Bugatti Chiron The scene at a private event held in Switzerland has been uploaded (depending on the scene in the video, it is in the video that was shot before ... 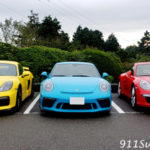 Porsche 911 GT3 (with wings) and GT3 Touring Package I've been looking forward to this day for a while. In the morning, I left home at 5:30 and headed to a certain place. Yes, on this day, Daikanzan Observatory in Hakone (A ...